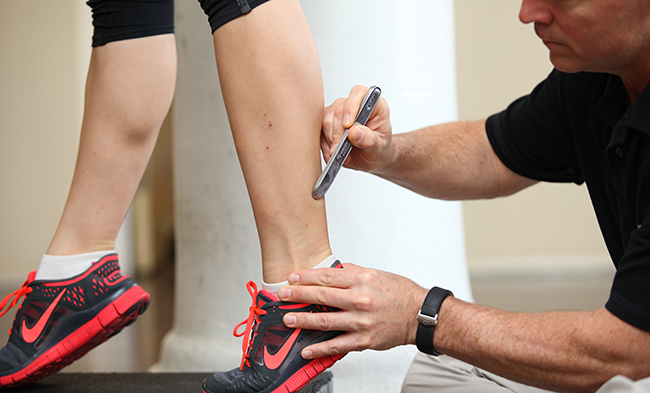 Have you ever had the kind of pain that never goes away? You’ve tried manual therapy, stretching, massage, cold laser therapy… You get relief for a little while, but don’t get too excited – you know it won’t be long before it comes back.

When you’re about to give up, we’re just getting started.

Last year a patient of mine named David came to Physiofitness when he could no longer type. This might sound like a minor inconvenience to most, but David’s life revolved around typing.  As a programmer, he was paid to spend 8-10 hours a day on a computer at work, and then when he got home, he’d spend his free time creating amazing and intricate jewelry using a 3D printer. This meant more than 12 hours a day on the computer, allowing his symptoms to steadily creep up over time before interfering with his ability to do his job.

At David’s first visit, it became obvious that the adhesions in his forearm muscles would not be healed with deep tissue manual therapy alone. His scar tissue was deep, his muscles were too big and developed, and he felt a great deal of pain as I dug away with my thumbs into his inflamed tissues.

This is where Graston Technique® came to the rescue. Graston makes full recovery possible because it allows us to get to the muscle fibers and connective tissue through specialized tools that are small enough to target these areas and break down the scar tissue. How is this possible? Think of your tissue as toothpaste. Have you ever left the cap off of your toothpaste and went back the next day to a hardened mass blocking the tube? When your tissue becomes inflamed, it also begins to harden. The longer you go without treating it, the harder it gets, and eventually may turn into a permanent scar. Graston uses patented stainless-steel instruments to smooth out rough tissue before it hardens completely, and we even find that some old, stiff scar tissue can be broken down as well.

After 3 months of working with David, he is now performing work tasks without any issues, and has transformed from a weak desk jockey to practicing Olympic weightlifting. Graston healed David’s injury, and the freedom he felt when released from a life of chronic pain allowed him to reach a level of physical fitness he never thought possible.

Pain in your body is something that you should not have to live with or get used to. If you think absolutely nothing can help your chronic pain, talk to a member of the Physiofitness team about Graston. We’d love to prove you wrong.